In today’s digital information age, digital advertising can be seen everywhere like  the shopping mall,airport,outside the building,and the roadside etc. It can promote your products to a large extent to obtain more economic benefits. Simply put, LCD and LED are two different display technologies for advertising. LCD is a display made up of liquid crystals, while LED is a display made up of light-emitting diodes. But LCD and LED screen,which is better? It’s hard to say,they are difference,both have advantages and disadvantages,for example:

1.The surface of the LCD screen is  is smooth and fragile;when LED screen is more robust.

2.The brightness of the LCD screen is low but LED screen’s is high.

3.The LCD screen  has high definition when the LED screen has low definition. 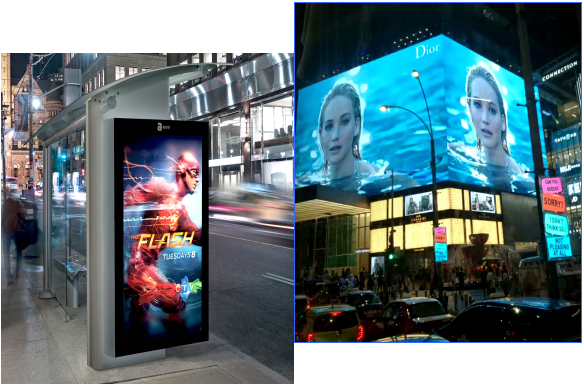 Although both are used for advertising, the usage scenarios are different. So when do you select an LCD screen? LCD screen usually use for the place which needs high definition and easy to maintain when viewed in close range.The most common ones are restaurant menus and dynamic ads on bus stop signs,and also the both sides of the underground passage,etc.

But as for large events, live broadcast of sports matches, large advertisements in supermarkets, large advertising screens on the roadside etc,there needs high brightness and definition,and a good view effect when at a long distance.That the LED screen is the best choice.Especially the outdoor advertising,there will be strong light,the brightness should be more than 4500nits, and LED screen has. There also will be thunder and lightning and storms,the screen needs good antioxidant properties and waterproof function.

With the continuous development of LED displays, LED displays have advantages over LCD displays in terms of brightness, power consumption, visual Angle and refresh rate. LED displays are increasingly functioning as LCD’s and may replace them in some applications.Will this lead to LED screen completely replacing LCD screen ?At present, it will not, LCD display or a certain irreplaceability.But LED displays will be used more and more.